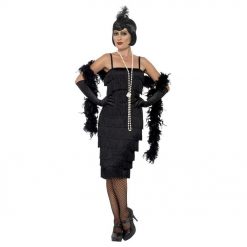 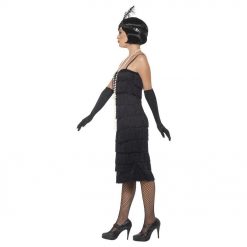 You’ll look hot enough to steal Jay Gatsby from Daisy Buchanan when you wear this Black Fringe 1920’s Flapper Costume. This cute costume will make you look like you walked off of a movie screen this Halloween. Flapper costumes are all the rage this year, so get ready to boogie down in this hot number. The fabulous dress has ten rows of fringe for the ultimate illusion of movement when you are out on the dance floor. 100% Polyester. Costume Includes: Flapper Dress plus Matching Headband and Gloves!!

Talk about an iconic look that never goes out of style: flappers have been a look that many have tried to imitate ever since their heyday in the 1920s. But just because it’s no longer the 20s (or the 20th century for that matter) doesn’t mean you can’t still dress the part every now and then. The flapper movement was all about having fun in a time when money was tight and laws were tighter. As with any rule, people found a way to break the laws of prohibition and were able to start an entire underground world in the process.