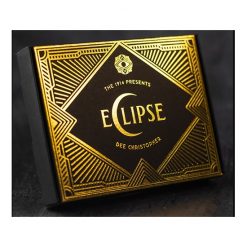 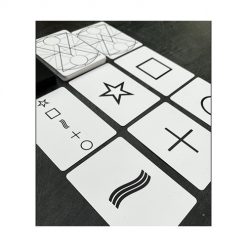 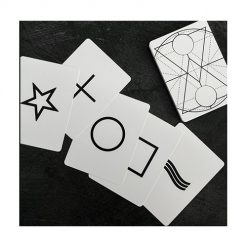 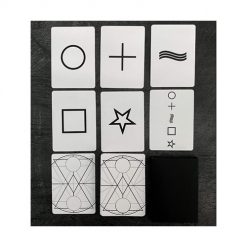 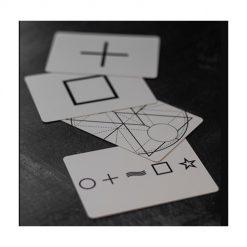 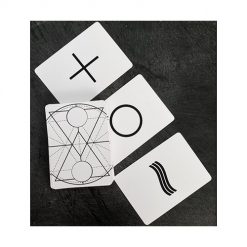 Every mentalist needs ESP cards in their toolkit and now you can own one of the greatest ESP decks ever devised. Eclipse is a secretly marked deck of 25 ESP cards (+ gaffs) meaning that YOU know which card your spectator is holding at any time by secretly glimpsing the marks on the back. But these marks are like NO other.

What use are marked cards if you can’t see the marks?! This is a very real problem with the typical alternatives; Nothing looks more suspicious than a performer leaning in and closely squinting at the back of a selected card to figure out what it is. Eclipse is the answer; the marks are SO bold, you can literally identify a card a spectator is holding from the other side of the room!
Bold, yes. Obvious? HELL NO. The marks may be bold to you but remain INVISIBLE to the uninitiated. Spectators can freely handle the cards and even under close inspection will struggle to find the secret.

People will be CONVINCED you’re psychic!

Eclipse is the brainchild of Dee Christopher, star of BBC Three’s award-winning Killer Magic television series. Having gone through hundreds of poor-quality ESP cards at gigs, Dee designed Eclipse to last a lifetime; The cards are printed on plastic stock to avoid degradation, so if they get grubby, simply wipe them clean. No more ordering a new pack for every gig you’re booked for! If we supplied your brand new Eclipse deck only with written instructions, it would be GREAT value for money. But we’ve gone one better (six better, to be precise).

When you purchase an Eclipse ESP deck, you will be granted exclusive access to an in-depth online video masterclass with the creator, Dee Christopher. The video will not only entrust you with the secrets to decode the markings but you’ll also be taught SIX impressive, hard-hitting effects that can be performed with your newfound knowledge.

What’s more, the effects taught can be performed individually or strung together to create a full 25-minute mentalism act, ideal for both close-up performances and larger parlor settings. Some of the effects utilize the secret marks, but many don’t, equipping you with a multitude of methods to help make backtracking impossible for your audiences.

The effects include:
ESP Opener
A spectator freely names any ESP symbol and you reveal that you knew exactly which symbol they would choose ahead of time.

Sensor
A three-phase routine allows you to “see” with your fingertips. Each phase increases in impossibility. With multiple methods in play, this powerful routine is impenetrable and everything is completely examinable at its conclusion.

Gambit ESP
Five face-down ESP cards are mixed on the tabletop by the spectator. The spectator drops an unread prediction on top of ANY card. The prediction is opened and is found to match the chosen symbol!

Serial Reveal
You predict the unique serial number on a spectator’s borrowed banknote! This effect adds impressive variety to the act and gives you a perfect excuse to naturally use props (envelopes and pens) left on the table from earlier effects.

Distance
The entire deck of ESP cards is shuffled by the spectator and washed around the tabletop. At a great distance, the performer can reveal each and every card the spectator selects. This effect CAN NOT be replicated with any other ESP deck on the market!

ESP cards have become synonymous with mentalism ever since they were first used in the 1930s to test for psychic phenomena. The undeniable allure of the five simple shapes has earned them a place in popular culture and now it’s your turn to do the alluring. Join the ever-growing list of magicians and mentalists choosing Eclipse ESP cards over traditional alternatives.

Are you ready to look like a REAL psychic? This is Eclipse.