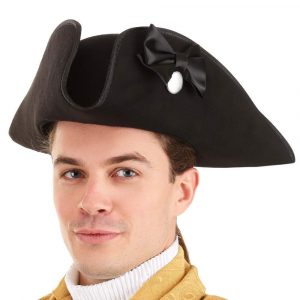 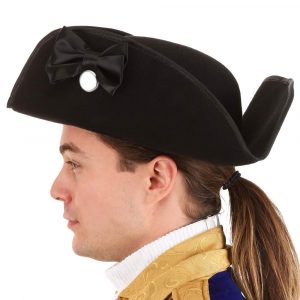 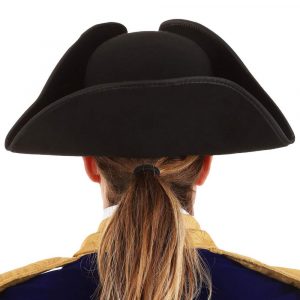 $24.95 – In-Store Pickup Only!
Captain your ship and build new worlds in this George Washington Costume Hat. Use your sharp wiles to build a new nation, as any founding father would do. This black felt pressed tricorn hat features an ornamental bow and is complete with an elastic size adjuster inside brim for an all-day comfortable fit. It makes a great historical costume staple for classrooms, theaters, or your own private costume wardrobe!

Washington was a founding father and the first president of this country but he also looked pretty great in epic scenarios. That could be because of his perfectly coiffed wig. Or maybe it’s because of his dapper uniform. But while we were taking in the painting “Washington Crossing the Delaware” we realized that Washington’s epic profile is greatly helped by his tricorn hat! Perfect for topping off your founding father look, this hat will have you ready to face river crossings and political meetings, alike! This style of hat brings the 1700’s back to life! Layer it over a white colonial wig and pair it with our sleek George Washington costume. Once you’re suited up, you’ll feel ready to take on the British forces and stand by your young, scrappy, and hungry country. Now that your outfit is settled, when do you all want to carpool to Mount Vernon?