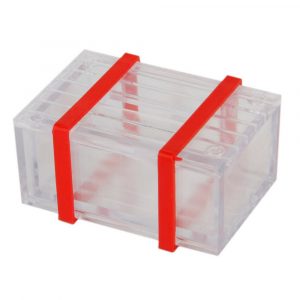 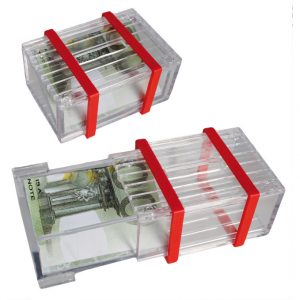 A small clear treasure chest-like box is shown. The box has a small slit in the lid like a moneybox but has no apparent way of getting anything out. Any object can be given to the magician, even items that will not fit into the slit, and the magician can place them inside the box. Spectators can be challenged to open the box and retrieve their item in five minutes, however, they find this impossible. To the frustration of the spectator, the magician effortlessly removes the item. I use this trick a lot, it has to be one of my best ‘sucker’ tricks. Because even though the spectator has seen how the box opens, they still can’t get it open! The box stands up to very close inspection. Very deceptive and very easy to use, once you have read the secret instructions. It is a great way to gift money for birthdays or any special occasion.

The Legend of the Wonderfool Box – Once upon a time, a powerful magician about to be executed by the King was granted one last wish. He asked that he might be allowed to live as long a time as it took the King to open a glass box & remove a gold coin which was placed in it. The King could never ever open the box in his LIFETIME & he ended up losing his throne, his queen & his mind.
The magician died peacefully of old age! Since those times the mystery Glass Box has been banned & forgotten for centuries.